See our research on COVID-19 >

Survey research is rapidly moving online – it’s cheaper, faster, provides greater flexibility in questionnaire design, and often has substantial advantages in data quality compared with phone surveys. Web surveys are being adopted in all sectors of the industry, from marketing to the U.S. Census Bureau’s American Community Survey to election polling.

That makes it increasingly important to assess the accuracy of these surveys. Surveys that include only those who use the internet (and are willing to take surveys online) run the risk of producing biased results. And, in fact, a notable share of Americans either cannot or will not complete a survey via the internet.

That raises two questions: Whom do you miss with a Web-only survey, and how does it affect your results?

In this instance, there was a way to get at the answers by turning to our American Trends Panel, a nationally representative group of Americans who have agreed to participate in our surveys. Most of the panel members participate via the Web, but a sizable number (representing nearly one-fifth of the public) do not. A little more than half of these non-Web participants are not online, and the rest would not provide an email address in order to be surveyed. However, we are able to survey the non-Web panel members by mail and assess how much, if at all, their non-participation would affect the outcome in a national poll conducted exclusively online. 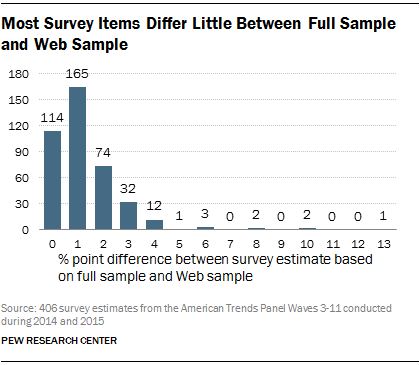 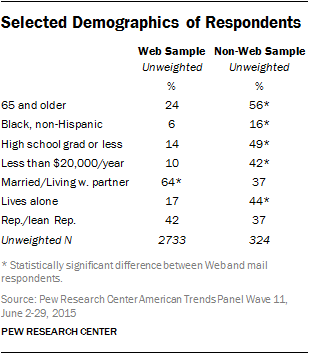 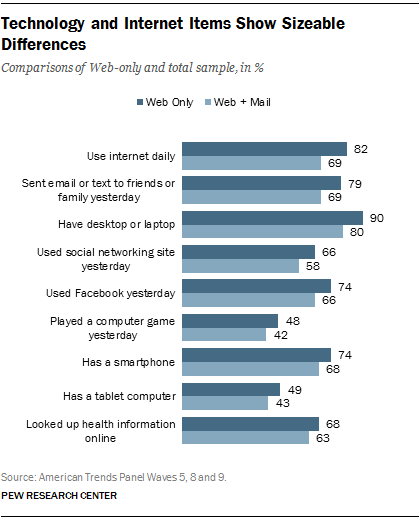 Q&A: What the New York Times' polling decision means
What our transition to online polling means for decades of phone survey trends
Polling methods are changing, but reporting the views of Asian Americans remains a challenge
How Pew Research conducted the polarization survey and launched a new research panel
Methods can matter: Where Web surveys produce different results than phone interviews

Here’s a look at how adults in the United States see cancel culture, political correctness and related issues, based on the Center’s surveys.

Are you a Core Conservative? A Solid Liberal? Or somewhere in between? Take our quiz to find out

Are you a Core Conservative? A Solid Liberal? Or somewhere in between? Take our quiz to find out which one of our Political Typology groups is your best match.

According to the survey findings, most Muslims believe sharia is the revealed word of God rather than a body of law developed by men based on the word of God. Muslims also tend to believe sharia has only one, true understanding, but this opinion is far from universal; in some countries, substantial minorities of Muslims […]

Migrant encounters at U.S.-Mexico border are at a 21-year high

The U.S. Border Patrol reported nearly 200,000 encounters with migrants along the U.S.-Mexico border in July.

48% of US adults say the government should restrict false information online, even if it means losing some freedom to access/publish content.

About Pew Research Center Pew Research Center is a nonpartisan fact tank that informs the public about the issues, attitudes and trends shaping the world. It conducts public opinion polling, demographic research, media content analysis and other empirical social science research. Pew Research Center does not take policy positions. It is a subsidiary of The Pew Charitable Trusts.